Bern. Federal Councillor Simonetta Sommaruga represented Switzerland on Monday at the UN Summit for Refugees and Migrants in New York. The states want to meet the challenges posed by large movements of refugees and migrants more effectively and issued a political declaration on this issue. Federal Councillor Sommaruga stressed that Switzerland wants to play an active role in implementing the goals agreed at the summit in New York.

UN Summit for Refugees and Migrants in New York, 19 september 2016 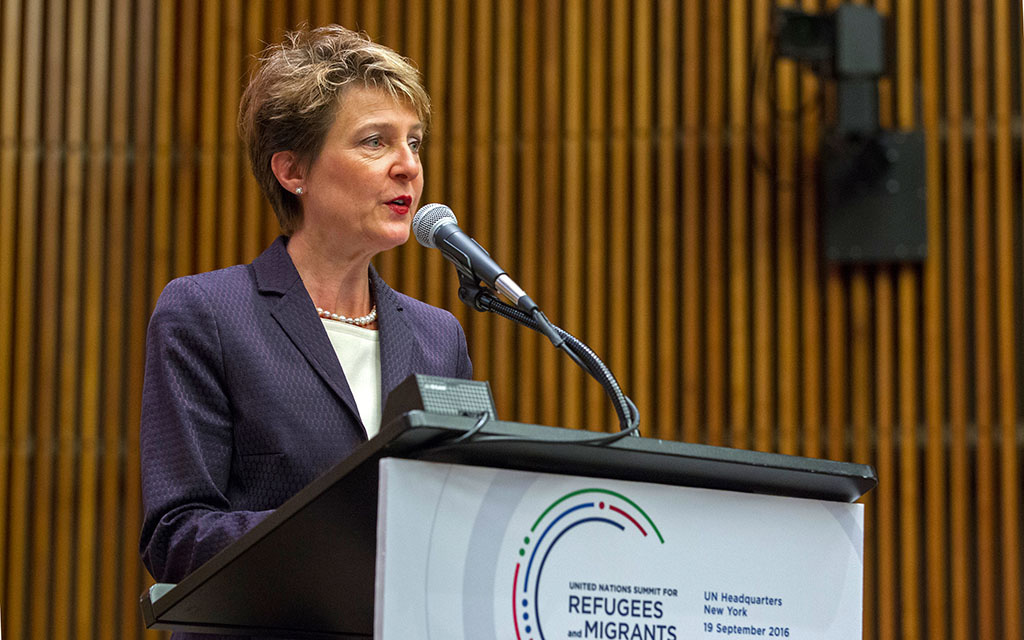 Some 65 million people are currently displaced. They are fleeing political persecution targeted at them personally as well as armed conflicts, human rights violations and violent extremism. In addition, millions of people are forced to leave their country every year because of natural disasters and the negative consequences of climate change, the effects of state fragility or systemic poverty.

The fate of these refugees and forcibly displaced people is a challenge for the entire world. Their situation highlights in all regions of the world the shortcomings of national and global structures in addressing the issue of refugees and migration. UN Secretary-General Ban Ki-moon convened the UN Summit for Refugees and Migrants to provide a forum for member states to discuss together the challenges posed by large movements of refugees and migrants and the international community's answers to these challenges.

At the summit Ms Sommaruga emphasised that more must be done to stop forced displacements, to ensure protection for displaced people and respect for their rights, and to promote their economic self-reliance. This will require combining instruments from the fields of humanitarian aid, development cooperation, migration policy and human security. "We must find solutions to share the responsibility for global challenges at the global level," stressed Ms Sommaruga.

Migration partnerships are particularly significant for bilateral cooperation. Switzerland supports various regional and global initiatives aimed at strengthening human rights and the protection of displaced people and migrants. In this context, Switzerland has launched the international Platform on Disaster Displacement and supports the Council of Europe's efforts to develop alternatives to the detention of under-age migrants.

The declaration issued by the summit participants largely addresses Switzerland's concerns. It covers a broad spectrum of measures for the protection of refugees and migrants and for the prevention of forced displacement and migration. It also mentions several measures for future migration cooperation, such as the commitment to bring the International Organization for Migration into the UN system. Lastly, the declaration also emphasises that this summit is merely a milestone in a long process that must continue.

A Comprehensive Refugee Response Framework is to be adopted which will include urgent implementation measures to deal with large-scale refugee movements. By 2018, two global compacts, one on migration and the other on refugees, are to be drawn up and adopted. At the UN summit, Switzerland took the opportunity to undertake to support the development of this process and the implementation of the agreed goals.

Ms Sommaruga is also using the summit as an opportunity to hold bilateral talks with several representatives of other countries. She is to meet Yemane Gebreab, Adviser to the President of Eritrea, Rahmani Fazli, Interior Minister of Iran, Anis Birou, Minister for Moroccans Residing Abroad and Emigration, Sylvi Listhaug, Norwegian Minister of Migration and Integration and Erlan Abdyldaev, Minister of Foreign Affairs of Kyrgyzstan. The head of the FDJP is also to meet with the UN Special Rapporteur on the Human Rights of Migrants.